What are you Looking for?

The son of FFT’s Don McKinnon attends Prisk Elementary School in Long Beach, CA and is currently in kindergarten. When Don and his wife participated in the opening orientation for new parents, they fell in love with the school. The Principal (Damon Jesperson) was emphatically eager to see the Prisk students (referred to by Prisk staff as “scholars”) become critical thinkers and be prepared for the future that awaits them by giving them an education that teaches them to learn from the past, live in the present, and prepares them for the future. Principal Jesperson went on to discuss the school’s STEAM Program (Science, Technology, Engineering, Arts, and Mathematics). Don was thoroughly impressed with what this school was doing and very excited for my son to be a part of all this. All of the students (including my kindergartner) would have science labs, engineering labs, art labs, and have a supported education in mathematics. The only area that Don thought was underserved was the Technology, where the only two items he heard mentioned was that the 4th and 5th graders have Chromebooks and they have a computer lab available for teachers to use. Don thought, “With all of this forward thinking, surely technology hasn’t been this overlooked.” “Perhaps”, he thought, “Principal Jesperson is simply awaiting the right opportunity. Well, I own a technology company with a VR division, let’s make something happen.” Boy was he right! Principal Jesperson impressed Don even further with his willingness to invite the participation of Fully Functional Technology (FFT) and Girls Make VR (GMVR).

Don shared with Damon his vision of bringing the wonders of the world to the people of the world through Virtual Reality technology. Don told him that he wanted to begin with 3D mapping local museums. Once they have something of note to prove their ability, he’d like to petition The Los Angeles Museum of Natural History and the California Science Center to engage with them in making parts of their Museums available to the world via VR. This way, those that can make the journey can be inspired and want to come see for themselves, and those that cannot make the journey are able to enjoy the benefits that Museums bring to the world as best they can. Don continued to share with Damon that he then would like to petition the curator of the Pyramids of Egypt to allow them to take 3D imaging of the interior of the pyramids. It is understandable that the people of the world must be locked out to preserve the structure, but surely a small team and a 3D camera would be of little impact (if any) and bring these wonders out into the world for everyone to see. Damon Jesperson responded positively and remarked, “Isn’t that what technology should be used for?!” He then explained to Don that Prisk Elementary was in partnership with the Queen Mary Museum and that they might be able to start there. He then explained that Prisk had just started a Female Leadership Academy (FLA) made up of about thirty 4th and 5th grade girls and that one of their goals is to work together in the community on a project that they could then present to the district board and the community. The Queen Mary 3D imaging project seemed to be a perfect fit for the FLA and this would be a great place to introduce this technology to the school and district for consideration in the STEAM Program.

Don decided to bring in Girls Make VR because FFT has worked with them in the past and they have a great deal of experience in delivering VR technology into the hands of young women. Don thought GMVR would be a perfect match for this project. Georgia and Robyn (of GMVR) taught the classes leading up to the actual 3D photography of the Queen Mary and helped the scholars understand the industry and applications regarding Virtual Reality. They also helped the girls make a few videos using the Gear 360 as an added way to introduce them to another type of VR technology.

Over the next few months, the teams had a series of meetings to plan and coordinate this project. The project was a resounding success and has created a lasting impact on the FLA girls and on the community. Don and the FFT team taught the FLA scholars how to use the 3D camera and let them do the actual photography of the Britannia Salon with assistance. During the trip to the Queen Mary, the FLA scholars participated in a presentation by two commodores of the Queen Mary who gave them a bounty of information on the Britannia Salon. The scholars recorded this information, asking questions and refining their understanding of the ship, the salon, and the era when the Queen Mary sailed the seas. They then brought all of this information to FFT and together they added it into the 3D tour as informational landmarks. After fact-checking and a little polishing, they published this project and gave it to the school as well as the scholars. The Prisk Elementary School Female Leadership Academy, in partnership with Fully Functional Technology, Inc, and Girls Make VR became the first to 3D image the Britannia Salon aboard the Queen Mary Museum in Long Beach, CA. 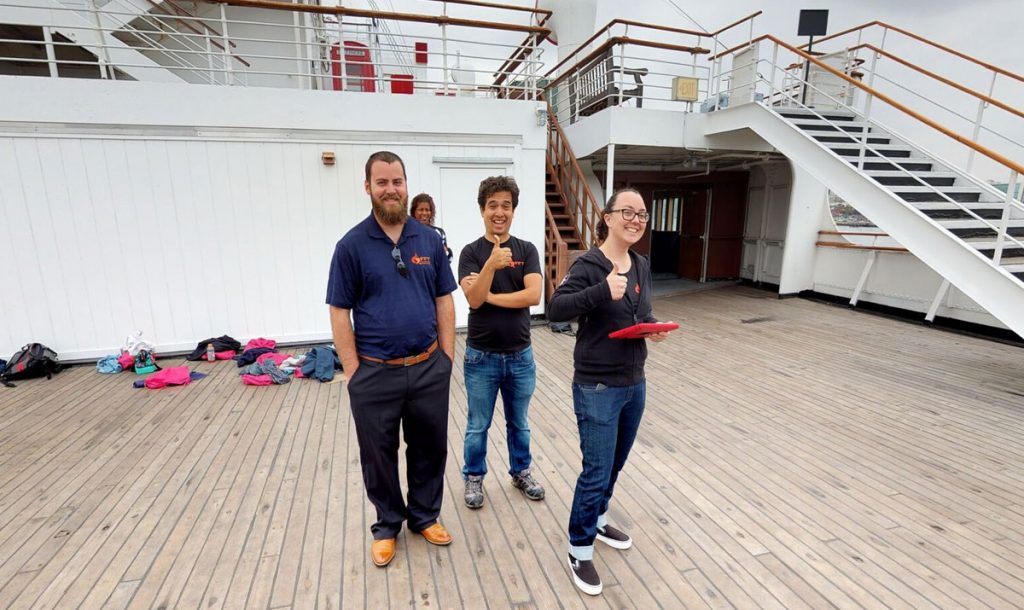